MF WE SHALL MISS YOU ! 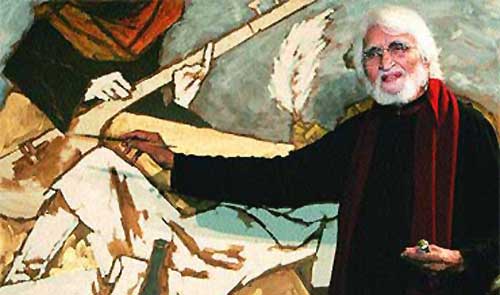 A lot has been said and written in tributes to MF Hussain, the 'Picasso of India' (as coined by the Forbes).

It would be a mere formality to repeat all that. I write this blog to Offer my admiration for this great icon and whatever little I know about him through some direct and a lot of in direct contact with him.

First thing that comes to my mind when thinking of MF is his silver hair and bare feet, with a rough, white khadder kurta hanging on a lanky, tall skeleton with a brush in his hand. Ninety percent of the times I saw him in this state, whether in the streets of Jama Masjid area or at the airport or in an art gallery.

In his days of struggle, he lived for years in a no star hotel meant for pilgrims called Haji Hotel in Jama Masjid area of Old Delhi .

He began life painting hoardings for cinema for which he recieved few annas per square feet.
As this wasn't enough to make his ends meet, he worked in a toy factory designing toys for a living.

Born in Pandharpur Maharashtra he lost his mother at the age of one and a half years.
The void in his life by the demise of his mother so early, left him searching for a mother figure in beautiful and strong women. 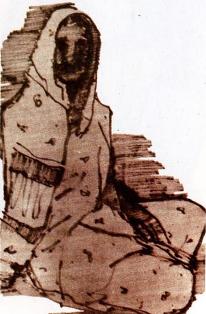 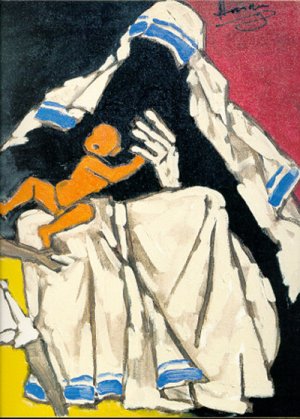 He loved painting women of substance, in all forms -from Goddess Durga, Saraswati to Politician Indira Gandhi to a nun Mother Teresa to actress Madhuri Dixit. 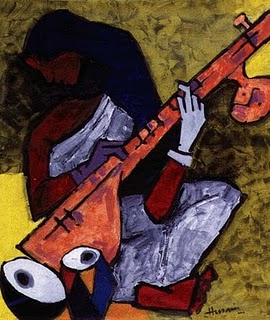 He did not finish school and his works were his certificates of achievement. Though later he graduated with the top national honours of Padm Shree and Padma Bhushan Awards

He fell for the poise and grace of Madhuri Dixit and watched her film 'Hum Apke hain Kaun” 67 times. After which he immortalised her in his oil canvas. But that wasnt enough for him, so he went on to make a film with her in the lead called Gaj Gamini.

‘Gaja Gamini is a timeless film that explores the woman. The central figure of the film is represented by a mysterious figure called "Gaja Gamini" (Madhuri Dixit), who inspires, arouses, and confuses the common man.’ mentions Wikepedia on Gaj Gamini.

MF is in'famous' for paintings of women in 'objectionable' forms by some and they made him controversial.

But few people are aware of his Sufi Series of paintings which he painted in the 1970s. 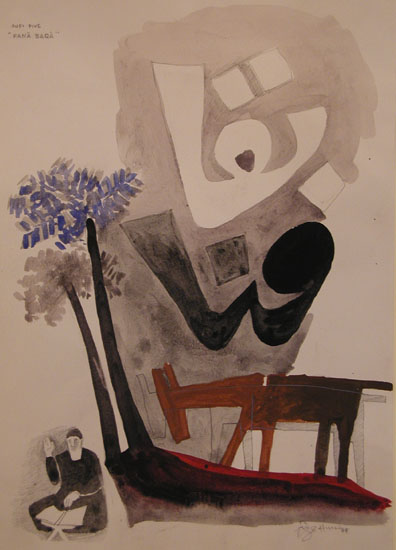 Unfortunatley the controversial paintings Naked India, Rape of India and of some Goddesses which though he had painted in the 70s led to his exile to Qatar in the fag end of his life, IN 2010. He took it in a stride and continued his expression through brush unabated.

Such icons are born once in thousand years. Although, Leonardo da Vinci or Picasso did not live in our times but we are lucky that MF Hussain did.

We shall miss you MF. 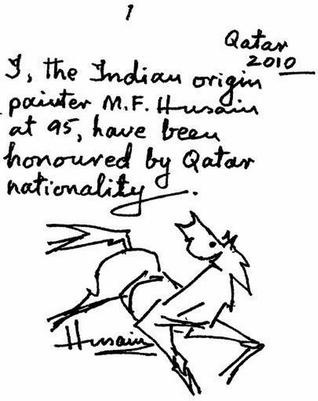 Sarfaraz Shah, you are the real face of Pakistan

Things~ A Poem by Ayaz Sheikh