Of Faith, Culture and the Personal Touch

Down the Memory Lane

Once upon a time, when we lived in Srinagar, Kashmir, no sooner than I turned five, a formal Bismillah was held. I remember clearly Ammi stitched an orange satin Sharara from scratch and embellished it with gota for me.
An elaborate yet home based dawat(dinner), was held in which a few family friends were invited.
From the next day I was taken every day by Papa to a family friend, Hashmi Uncle’s house with a beginners Qaeda and the dupatta (from the sharara set) folded in a bag together. Hashmi Uncle’s aunt who was called Phuphijan gave sabaq(lessons) to me and Rana.

Rana was from the same household as Phupijan. The idea of going to their house to read Qaeda was more fun than learning. I distinctly remember Phupijan never beat us or shout at us, though she was strict at times. She did not let us girls giggle while reading our lessons.
In about an year, or so I finished the Qaeda, and there was a celebration(graduation) for it. Phupijan invited my parents to their home, prepared some dessert, and presented us girls with batwas (pouches) filled with candied saunf, nuts and misri (sugar crystals). The batwa was stitched by Phupijan herself during the months we were reading Qaeda with her. Incidentally I also remember thinking that she gave the more decorated batwa to me than to Rana. I have yet to see a more intricately stitched batwa which had strings and even a partition within the space.
I graduated to the 30th Sipara as the stepping stone for Quran.
In a few months Hashmi Family left Srinagar. So I was passed on to Mubarak Auntie. After a while they left the place too and we also came to Delhi.

In Delhi too, Ammi arranged an Ustani Saheba who taught Quran to girls in different homes as a means of livelihood. Ammi asked her permission if she would teach my 10 year old twin brothers too. She kindly obliged. In some years, we completed the 30 Siparas.
Again an elaborate Ameen was held at home. Close family and friends were called. Ustani Saheba was also invited and she was given a special jora(dress) and cash.
She brought for me a book of prayers as a present and instructed, “Keep practicing your fluency (qirat).”
Ammi kept in touch with Ustani Saheba as she visited us a few times after that.

A decade later Ustani Sahiba was invited in my wedding too. She came with a Quran contained in a decorated Juzdaan (special bag) which she had hand-stitched and decorated with gotta. She said she began working on it as soon as she heard I was getting married. Again the instructions from the gentle lady were, “Keep reading this to maintain your fluency.”

(I had almost forgotten the whole experience until a day ago it was reminded by a discussion on Qaris teaching Quran these days. Although there is much stress about religious preaching these days, but the personal & cultural touch to it has gone missing).
P.S. Below are the examples of Batwa and Juzdan quite close to that I was given. 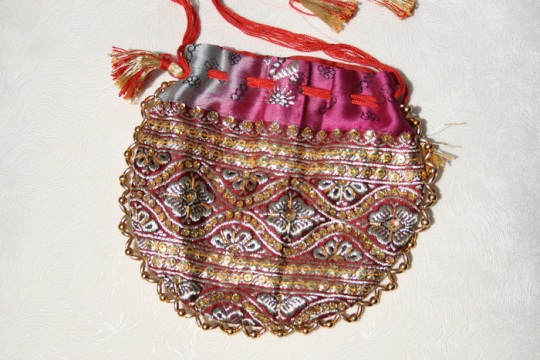 Down the memory lane.., Uncategorized