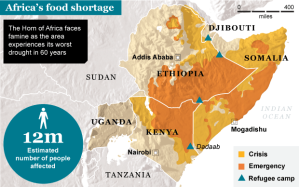 Insufficient rain, drought, civil war, religious extremism, escalating food prices, bored donors of the world are all responsible for the unprecedented situation that the famine of Horn of African has reached. A handful of bodies are striving to make a difference.

There are 13 million people at risk of dying from it. And like most calamities-natural or man made , the most vulnerable are the children.

Young children are dying on their way to or within a day of arrival at camps in Ethiopia and Kenya, There are more than 50% of Somali children arriving in Ethiopia are seriously malnourished. In Kenya, that figure is between 30% and 40%.( UNHCR).

I know we all are aware of the situation but perhaps the day to day issues, our own personal and public problems make us unable to look deeper into the problem.

Going through the routine news feeds, I came across some harrowing stories about the drought which chilled me to the bones and I felt extremely guilty for not being able to give it the due importance that I should.

The stories are numerous, but the most moving were related to the kids, which would be enough to shake our conscience. However I thought I’ll share some related to the children there….

“When Somali mother Eblah Sheikh Aden gathered her seven children and set off walking for Ethiopia to find food, she never imagined she would end up sending some of her brood back into the heart of famine.
“They were extremely sick and there wasn’t food here,” she told Reuters in the Kobe Camp in Ethiopia. “I couldn’t watch them die and had to make a decision.”
It took Eblah two days to walk to the camp but another nine days for her to be registered to stay, such are the numbers of sick and hungry streaming. (Yahoo News)).

A father carrying the dead body of his one month old son: “We had taken Addo to the clinic but he never recovered,” said Hasano, who had fled southern Somalia with his wife and his one month-old son. “I’m now looking for space to bury him,” he said, nearly an hour after Addo died from severe malnutrition.(Yahoo News).

In Dadaab, Kenya, a refugee Barwago Mohamud huddles silently beneath a few blankets stretched over sticks at night, fearing for her life after a neighbor was raped, and a naked woman who had been kidnapped and gang-raped for three days in front of her terrified children was delivered to the medical tent next door.
“What can we do?” Mohamud remarked. “Our neighbors have been raped at night. We are afraid. Some boys are helping watch at night in case of trouble but they also work during the day.”
And Mohamud, whose door is only a blanket draped on a stick, keeps her daughters close and dreads each sunset.(BBC)

“There is the story of Sahan who was on a bus coming over from Somalia when four gunmen stopped the vehicle. The women were ordered off and raped in the bush for three hours. She has not reported the rape because she was living far away from any medical services on the outskirts of the camp and did not want to leave her family. She asked her last name not be used to protect her privacy.” (BBC)

“Eyangan’s worry for her grandkids is constant. Four year-old Alemilemi is suffering from a protein deficiency illness, Kwashiorkor, stunted growth and malnutrition while his younger brother and follower Tipen is severely malnourished. Tipen is weak and tired from dehydration and hunger. “He has since given up on crying because he can only cry but there is no food to offer. I only gave him black tea just to stop him from crying,” Eyangan explains. (World Vision).

Now the news is that Tipen has died.

Along with these tragic stories about kids there is some tiny  ray of hope too.

An 11-year-old Andrew Andasi, a Ghanaian schoolboy has so far raised more than $500 (£300) for victims of the famine in Somalia.
He launched his campaign last week after watching footage of people walking in search of food.
He told the BBC he wanted to raise a total of $13m during his school holidays from private donations.
After a meeting with the UN World Food Programme Bank director in Ghana to ask for advice, Andrew set up a bank account for donations on Tuesday.
“I’m very very sure that I can raise it in just one month,” he told the BBC.
“I want individuals, companies, churches, other organisations to help me get 20m Ghana cedis.”

Said he:
“If I get the opportunity to go to Somalia I will talk and I will let the UN to make an announcement the warring groups in Somalia should stop because of the sick children and women,”
(BBC).

With these chilling stories of the famine, I wonder if our own stake holders of peace will ever learn any lesson.
Or maybe for them our floods are enough of a deterrent against famine on our land, hence, carry on the killing fields unabated.
I just wonder. .

(P.S. All the stories are simply copy-pasted the way I read them from various sources mentioned in the parenthesis.)