The story of Siachen

With the tragic news of 150 Pakistani soldiers buried alive in an avalanche in the Pakistan base camp at Siachen, it brings back to memory the bitter truths about this conflict.

No matter what India and Pakistan may claim about its strategic importance, Dr. Stephen Cohen, a well-known and respected Washington-based South Asia analyst, considers,

“Siachen conflict is a fight between two bald men over a comb.”

In his view, “Siachen… is not militarily important… They (Indian and Pakistani armies) are there for purely psychological reasons, testing each other’s ‘will’.”

The talks for demilitarisation of Siachen did take place between India and Pakistan in May 2011, but fialed to reach any agreement.

The truth remains that this stretch of icy wasteland holds no political or economic importance to the billion and a half residing on both sides of the border.

Instead of being a battle ground, Siachen should be demilitarized, and to evade the unresolved dispute of AGPL ( actual ground position line) the area could be seen as a ‘common ground’ precious enough to study and conserve the glacier which is under threat due to the climate change. This can easily stand as a symbolic Peace Park. And the billions of rupees used to maintain its cost as outpost for armies should be directed at improvement of the plight of the impoverished peoples on both sides. 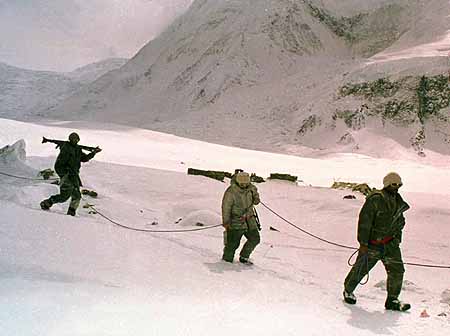 Or better still let ordinary youth from both sides of the border play kabaddi in snow.

Reflections of a little mind !

Please pray for us too, Mr President !