The evening of Saturday, the final day at TD Mosaic Festival 2013 was destined to experience a historic performance by Channi Singh OBE, the founder of Alaap and better known as the Godfather of Bhangra Music.

I could see people of all age groups from young to many from middle aged to seniors from Mississauga, Brampton and as far as from Richmond Hill came to hear their favorite bhangra music hero. The lawns was almost near full capacity from the outset.
Before the show began, I talked to a middle aged lady Harjeet Kaur, who had come early to occupy the front row. “ I have not seen him yet, but I have danced on his music all my life, on weddings, manjas , and other occaisions.”

While introducing Channi Singh on stage, Asma Mahmood, the co-founder of the Mosaic Festival acknowledged to have “danced to his songs on our wedding nearly three decades ago”.
As Channi Singh appeared on stage, I could sense the current of energy run through the crowds. Amidst a roar of applause he began with on of my favorites: “We Wanjareya, karma waareya…”
This was followed by a song from his first album, “Teri Chunni de sitare…” and then his song with Asha Bhonsle: “Main nu chooriyan chara de chan we., main cham cham nachdi phiraan…”, which set the pace for one electrifying song after the other.
“Bhabbhiye ni bhabiye ni sun bhabhiye”, was the song that created history by being the most popular bhangra song, the world over.” Revealed  the Godfather himself, before he began the song. As song is also referred as the Anthem of Bhangra, I could sense that outnumbering the young,  many escited middle aged women, who had begun with tapping their hands and feet, now stood up to dance. The beats were certainly irreristible for anyone in the crowd.
I noticed quite a few nondesi faces dancing too.  I asked Sue, who is from Singapore : “Do you know this music?” She responded while still dancing, “Oh I have heard him a lot in Singapore, everytime on our Indian friends weddings.”
While talking to Channi Singh earlier he told that 90% of the songs are his own lyrics and music compositions. He also mentioned of the few of his songs that were blessed to have been the original tunes on which Bollywood numbers were copied.

An elderly Gurpal Kaur, in her mid sixities, stole the show by coming right to the front of the stage to bhangra on “Nach kuriye ni zara nach kuriye…”
She later shared with excitement, “This took me 40 years back in my life”. And then excitedly asked, “But am I not still young?”
Her husband, a retired brigadier from the Army, teased her, “He is still her hero, not me.”

As he sang “Makhna” , “Soneya” , “Mere Haniya”, “Dil janiya” the electrified crowd went berserk with the chants of “Oye hoye “. The atmosphere was charged beyond words.

“It feels being in Lahore.”  felt Lubna Sami, as she screamed back Oye Hoye.

Channi Singh has 26 albums to his credit, in a career spanning 35 years. He has the honor of being bestowed the highest British Award in Music, by the Queen of England, and also to have performed in 10 Downing Street. He also has his name as the most selling Asian Band in the Milleneum Edition of the Guiness Book of World Records.

While talking to him, he shared his belief in unity of humanity beyond regions and religions, and was blessed with being the first Bhangra band to visit Pakistan. He said before he performed in Lahore, he went to the Data Darbar for blessings.

He also performed for several fund raisers for Imran Khan’s Cancer Hospital in UK and some other cities of Europe.
He himself has to his credit many performances for charitable causes like Children in Need, Teenage Cancer. He has a foundation called One Britain One Nation.

I found him a very humble and pleasant person to converse with, and could not hold back my observation that he bore some resemblance to my favorite Singer Jagjit Singh, in both appearance and conversation. He informed that  Jagjit Singh was a close friend, and he too was fond of his Urdu ghazals.

A sample of Channi Singh music ( from his album):

The early part of TD Mosaic Festival Day 7, the final day saw some beautiful performances by the budding artists and for those craving for a diverse cultural diversity with a good  deviation from the popular flavors.

Shakthi Sanjana, performed Bharatnatyam dance on a devotional song of Lord Krishna. The song is about welcoming Lord Krishna to Mathura after he kills the demon Madhu with flowers.

Through her abhinaya (facial expressions) and mudras(hand symbols), she honors Lord Krishna applies sandal paste and musk thilaka on his forehead.

She interprets the meaning of every word of the song which describes Lord Krishna as he who killed demon Madhu, wrestlers Mushika and Chanoora and elephant Kuvalaya pita.

Shakthi Sanjana  is a trained classical Bharatnatyam dancer from India.  She is currently studying electrical engineering at University of Toronto and dance is her passion. 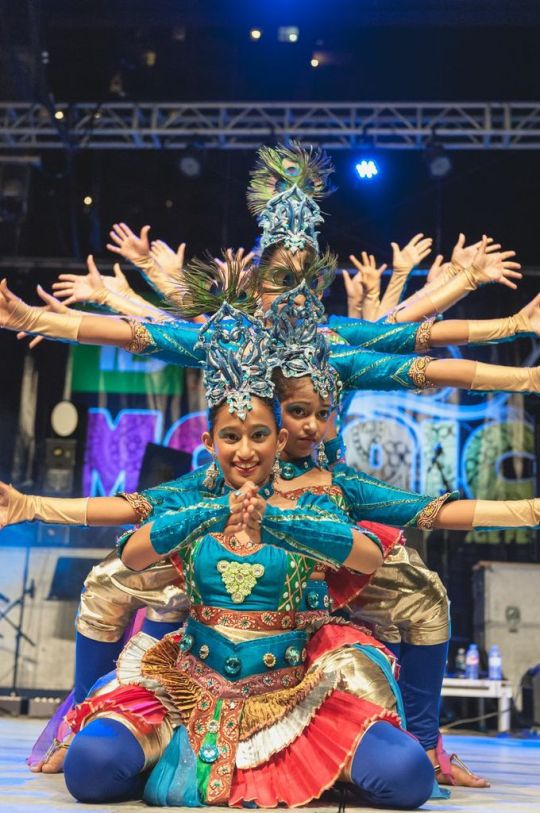 Rangara Performing Arts, performed “a beautiful peacock dance with their movements imitating a dancing peacocks who represent peace and harmony with the beauty and nature around them”, told Rashanthi Hettiarchi, the director of the school. 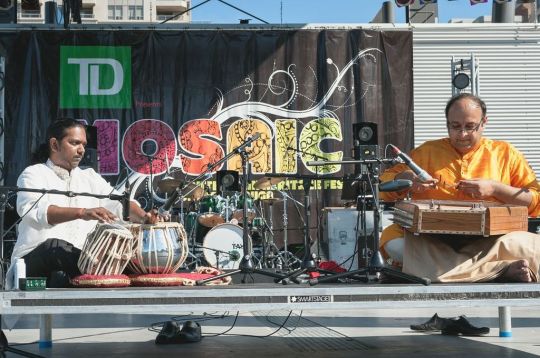 Another treat to the ears was the Santoor performance by Shri Shreyas Sanat Ambikar, a disciple of Pandit Shiv Kiuamr Sharma the maestro who popularized Santoor internationally. Though an engineer by profession, for Shreyas it is his passion and love for the musical instrument that led him to be formally trained in Santoor. He has to his credit professional performances as far and wide as Australia, Singapore and Europe.

“One needs to be madly passionate for Santoor to be able to master it. Its 100 strings that need tuning, is an extremetly demanding task in terms of patience and endurance.”

100 strings remind me of the origins of the name SANTOOR. Santoor in the ancient Indian scriptures is mentioned as Shat-tantri Veena (Shat = hundred, tantric= strings, Veena=( implies) musical instrument).

Santoor like instruments date back thousands of years, and similar instruments are seen in other parts of the world.

In China it is called Yang Quin, in Central Asian countries Cimbale, in Iran & Iraq Santoor, in Greece Santoori, in Germany Hackbret, in Hungary Cymbalom and many European Countries and in America Hammer-Dulcimer.

However, the unique character of Kashmiri Santoor is that it has 100 strings, not one less nor more.

Pandit Shiv Kumar Sharma, who is the Guru of Shreyas is credited to introducing the Santoor to international forum. Before this, it was familiar only within the Kashmir valley, and was associated specifically to Sufiyana mausiqi.

Accompanying him on Tabla was an accomplished Toronto based Tabla player Dave Bansraj.

The beautiful raags of Hansdhwani ( the song of the swan) and Mishramaand were performed by the duo instantly transported the audience to the Kashmir Valley, with the images of Swans swimming in the Dal Lake.

Turbinator was another extremely pleasant performance by the brother sister duo Gurpreet Singh Sareen and Soni Sareen . A very friendly, unassuming and humble duo, they enthralled the audience with the flair with which they presented a beautiful combination of East and west.

The siblings have music in their genes. Their great grand father Guru Gyan Singh was a recipient of Tansen Award, the highest music award in India. Since very early, they grew up singing Gurbani in the local and other Gurudwaras in US. Gurpreet, the turbinator is an accomplished Tabla palyer too, apart from being a guitarist. His was trained at home in Indian classical raags, while the outside influence made him interested in Jazz and Blues.

They discovered they could identify similar tunes between the Indian classical raags and the Jazz & Blues.  Hence decided to bring combine them together. As Gurpreet  sang the Blues or Jazz songs with Guitar, Soni responded with  Indian Classical in her beautiful voice in while playing a  Dilruba in what we call in Hindi a jugal bandi.

I was particularly enchanted by One love one heart by Bob Morley
and the Dil hai chhota sa chhoti si asha jugalbandi.

Before inquiring Soni, I was intrigued by the instrument she was playing.  Soni told she chose to play Dilruba because this was given to her by her Nani( maternal grandmother), who used to play it herself, when she sang  Gurbani in India.

Dilruba, which means one who ravishes the heart, is a musical instrument used in North India by the singers who perform kirtans in the Gurudwaras.

It is about 200 hundred years old instrument and thought to have originated around the time between Guru Hargovind and Guru Gobind Singh. It became popular with Sikh warriors as a light weight portable instrument used to play shabads, or the hymns ofGurbani kirtan, accompanied by the tabla.

The dilruba is played by sliding the fingers of the left hand up and down the strings along neck placing them between the frets while the right hand holds the bow sliding it across the main strings in order to produce notes of raag, a classical Indian musical score.

It was heartening to see, how the audiences, including families, and youngsters came to appreciate and applaud the two.

Soni aspires to complete her Masters in  Education to teach music, while Gurpreet is a budding  electronic engineer, however still does not know how will the fate take him , after a popular musical performance in the American Idol.

Gurpreet said he chose to sing western music, to be able to break the stereotype and to prove that a person of his appearance could also play Blues and Jazz.

He narrated an interesting incident in which during the American Idol season the day his name #Turbinator was trending, #OBL was also trending on twitter, and he received few offensive comments as a result.. But as he progressed higher in the program, he saw the same people transform to appreciation.

It was touching to see him mention the reference to unity beyond religions and regions during his interactive performance.

Personally, I was touched by their humility and simplicity, and wish Gurpreet and Soni rise to heights as they go forward in their life.