MADAM CURIE–A DREAM OF EVERY STUDENT

This excerpt is taken from an article ”
EMERGING WOMAN HAS A LOFTY AND KNOWLEDGE BASED PRIDE – Dr. A.P.J. Kalam” on four Indian Women Scientist published in India Current Affairs on September 3, 2010. 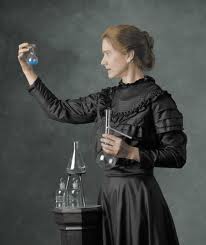 Madam Curie was a co-worker of Henri Becquerel during research, who discovered the properties of the element uranium. Curie came to know about those properties and set about investigating the effect, which she named “radio-activity” for her Doctorate research.

Madam Curie’s life has full of challenges. She was not afraid of the problems, she defeated the problem and succeeded. This experience of Madam Curie will definitely be an inspiration for all students of the present and future generations.

Marie Curie checked many other elements to determine whether they too were radioactive. She found one, thorium, and also came across a source of radiation in a mixture called “pitch-blend,” which was much more powerful than either thorium or uranium.

Working together, it took Marie and her husband Pierre four years to isolate the radioactive source in the pitch-blend. Madam Curie used to carry large quantity of pitch-blend on her head for extracting few grams of material in the laboratory which needed tons of ‘pitch-blend’. That few grams of the material was her discovery. Marie named it as radium. For the discovery of radium, Marie and Pierre won a Nobel Prize in Physics in 1903, which they shared with their friend A Henri Becquerel. Shortly, Marie found that what she had discovered was not pure radium, but she was able to isolate the element itself after quite a struggle. For this work, she was given the Nobel Prize for Chemistry in 1911.

During the first World War, Marie Curie went to work for the French designing and building X-ray machines. Knowing that moving soldiers to a hospital before they needed surgery was not always possible, she designed the first mobile X-ray machine and traveled with it along the front lines during the war.

On July 4, 1934, Marie Curie died in Paris, killed by her own experiments. She died of radiation poisoning and may have been the first person to do so. Marie Curie had brought herself up from poverty, struggling to get her education and succeeding brilliantly. The work she did, she did with patience, often getting results only after years of careful experimentation, while struggling for money to support her work. For her struggles, she received two Nobel Prizes – the first woman to win even one. Through the knowledge she gained, thousands of lives have been saved. The courage and perseverance shown by Madame Curie in her pursuit of scientific mission and achieving successes are indeed remarkable and stimulating.

Comments on: "MADAM CURIE–A DREAM OF EVERY STUDENT" (3)