Like the languages spoken and the faiths that exist, South Asia is a treasure of countless arts and crafts both ancient and modern.
RUNG at ROM presents some of these crafts in their original forms, but also attempts to make them interactive to enable the art lovers attending the festival get a hands on experience on it.

Arabic Calligraphy
Arabic Calligraphy is a much revered art form, which is extremely well developed for the script that Urdu, Persian and Arabic languages use. Despite a developed curriculum for the art of Calligraphy by a Turkish calligrapher almost 550 years ago, Calligraphy does not find its place in the curriculum of major institutions of the world, and manages to survive by the love of individuals who take it as a personal mission.
Arabic Calligraphy is envied by other scripts for being so fluid and flexible that one can create images through its writings.
We will have calligraphers demonstrate the art at ROM, write book marks and names for the visitors, and also let those interested to try their skill of writing in the calligraphic fonts like Naskhi, Kufic etc.

Hand block printing is a centuries-old tradition in India, and is alien to none
Every region from Sindhi Ajrak  to animal motifs block printed in Jharkhand and Bihar, from Rajasthani Sanganeri print to Kalamkari in South India, each style has their own unique designs and themes.

Originating from Sanganer in Rajasthan, block printing reached great heights during the 16th and 17th century in European countries and became one of the major exports of the East India Company. Almost 500 years old, it can be rightly categorized as a heritage craft.

The craft has traditionally been practiced by local  artisan community, none of whom have ever received formal training. They watch and learn as a matter of daily routine. The whole process, from printing to dyeing, is executed manually at home involving family members in most places. The dyes used in almost all types are traditionally organic dyes.

RUNG at ROM shall have  stall with collection of wooden blocks and ink for the visitors to experience block printing and take away their printed designs on cards.

Hala is a small town 35 miles north of Hyderabad in Sindh known for its master craftsmen of  colorful wooden furniture and blue ceramics.

The craft of blue ceramic making known as Kashikari originates came from Iran almost 300 years ago, but was given a local touch by varying the designs.

The craft of making blue tiles, called Kashi Kari dates back to 300 years ago when women made the clay dough at home, turned them into shapes, dried them, painted and then glazed them. Many such tiles were used to adorn the shrines and mosques built in those times. Like the shrine of Shah Abdul Lateef Bhitai at Bhit Shah.

Kashikari is spread across the Thar desert  from Thatta, Hala in Sindh to  Multan in South Punjab to  Rajasthan in India.

Henry Cousens in his book ‘”The Antiquities of Sind’ of 1929, he wrote:
“The brickwork…is very superior, the bricks, or, at least, those on the surface, being made of the best pottery clay, perfectly formed and dense, having cleanly-cut sharp edges, and of a rich dark red. The enameled bricks are glazed, upon their outer surfaces, in light and dark blue and white…The colored dadoes are an especially fine feature…A single design, without duplication, will sometimes cover several square yards of surface…Then, again, some tiles are as small as half an inch square, and over a hundred are used in a square foot, of mixed sizes, forming a perfect mosaic…”

Sadly the art has not seen much improvisation over the years, and are unable to compete the durability of ‘imported’ tiles. 😦

RUNG Festival will indeed showcase a few beautiful mosaic of tiles brought from the tile makers from Hala.

Kite flying originated in China as early as 5 C BC. As it came to India in the medieval times, it took over as a sport, with Patang baazi as a fight between kite flyers to cut the string of the opponent. Festivals like Makar Sankranti and Basant are traditional occaisions for kite flying and holding Kite-fighting. Kites with specific  designs curiously bear names like Kup, Patang, Guda, Nakhlaoo, Pan, Tukal, Muchal, Farfarata etc. Lahore is known as the Kite Capital of South Asia, with a full fledged kite industry existent there.

How could Rung Festival  miss an ensemble of kites? 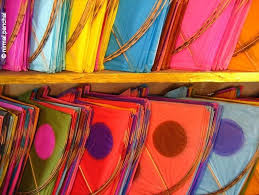 Sadeqain, the legend~ a special feature in Rung Festival at ROM