The opening lines of this 45 minute song are:

Ya Habeebi,
My sweetheart.
Illeil wi samah, wi ingomo iw amaro, amaro wi saharo.
The night and its sky, its stars, its moon, moon and keeping awake all night.
Winta wana, ya habeebi ana, ya hayati ana.
You and me my sweetheart, my life.

-And the closing lines:

Ya habeebi yalla in3eish fi 3yoon illeil, . Winool lilshams ta3ali, ta3ali ba3di sana, mosh abli sana.
My sweetheart let us live in the eyes of the night and tell the sun come over, come after one year not before.
Fi leilate hob hilwa, bi alfi leila iw Leila,
In a sweet night of love, in one thousand and one nights.
Bikolli il3omr, howa il3omri eih ghair Leila zayyi illeila.
They say it is the life. What is life, but a night like tonight, like tonight.

Fortunatley I grew up listening to Umm Kulthoom  and the tales of her live performances from my Professor father. I saw my father 90% times surrounded by books, but whenever he played Umm Kulsoom’s audios on the deck, in his leisure time, it was hard to envision he was the same man. I feel the poverty of expression to describe my feelings…

He would often exclaim that he got three things from his stay in Cairo in the early sixties—his PhD, a knowledge of Arabic, in the flawless Egyptian accent and love for Umm Kulsoom.

“On Thursday nights, the streets of Cairo would empty as people gathered around radio sets to hear the great singer.”  I heard my father repeat this a countless times said with a twinkle in his eyes.

And infact, in honour of those broadcasts, Radio Egypt still broadcasts her songs every first Thursday at 10 pm.

It is hard in words to describe her charisma.  But listening to her enchanting Enta Omri,  Alf Leila o Leila and other songs over and over,  it wasn’t hard to imagine the euphoria that was created in her concerts.

Umm Kulthum was, indeed, a master at casting a spell over her audiences.

Maker of a documentary on her, ‘A Voice Like Egypt ’ Virginia Danielson says “Umm Kulthum’s concerts were famous for the spontaneous cheers that would break out whenever her performance seemed to close the gap between poetry and emotion. Poetry is a deeply revered art form in the Middle East.”

She gives an example. “When you hear Umm Kulthum sing, “I’m afraid your heart belongs to somebody else,” in the song “Ana Fe Entezarak,” she nails that anguish.  And the way she treats the word ‘somebody else,’ which is ‘inse’en,’ is just heartrending. You can hear the feeling of the poem come through in the way that she sings it.”

Her music had a unique quality called ‘tarab’ ( best translated as enchantment).

“Tarab is a concept of enchantment,” Danielson says. “It’s usually associated with vocal music, although instrumental music can produce the same effect, in which the listener is completely enveloped in the sound and the meaning in a broad experiential sense, and is just completely carried away by the performance.”

Part of tarab is the idea that listeners are as important as singers; that there’s a powerful, spiritual exchange between them that is crucial to the performance.

“But what it refers to is the experience of really being carried away by the music. People would tell preposterous stories about getting up and leaving the house and not knowing where they were going, and just all kinds of experiences of completely forgetting your troubles, completely being outside yourself, having been transported by the experience.”

She was referred to as the Lady by  Charles de Gaulle and  Salvadore Dali, Jean Paul Satre, Bono were among  her fans.

Lastly, do envy me for having been nourished on this music since very young :). 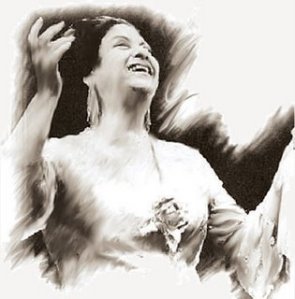