A tale of two kitties

Just a week ago, arrived Taara, a 9 week old kitten, to our home. We were apprehensive what reaction the cat already present at home,  Maaya, would have.
Taara was left in the carrying box in the middle of the living room, while we keenly awaited Maaya’s reaction.

The kids had searched over the Internet about the adjustment process of the new cat at home. Since cats are territorial creatures, the two should be kept separate and it takes a gradual process over several months for them to accept each other.

Maaya’s first reaction to Taara scared us. Her tail got all puffed up and the back curved signalling danger. She smelled the kitten through the cage and roared. Hence, both had to be separated immediately to different rooms.

Since Taara kept crying in the tiny carrier, we let her out and she was allowed to survey the new home. She jumped and bumped like a puff ball smelling every nook and corner of the house. It seemed as if she was hunting for her mother and two siblings who were left behind in the other home.

In the second attempt, when the two felines were made to face each other, Taara seemed unwary of Maaya and in fact followed her everywhere. Having come from a family of cats and being a baby, perhaps she hadn’t yet developed the fear of strangers.

Maaya looked very scared though. She would recede as Taara attempted to get closer. The more she reversed, the faster Taara got to reach Maaya. She climbed over the table and jumped over the frightened, double-sized Maaya with full force. The kids would run to pull Taara away and distract her with a feathery toy.
In another instance, when Maaya was sitting on the chair and wagging her hanging tail, Taara kept playing with it from underneath the chair, until Maaya realised and ran away. Taara was all out to befriend Maaya, but being shrewd and cautious (what we call worldywise) Maaya wouldn’t give her a lift.

Maaya was kept confined to  the bedroom, as Taara was allowed to run around the rest of the house, to make her feel free. But the bundle of naughtiness and hautiness wouldn’t still be happy, and kept mewing non stop sitting outside the closed door.

Different feeding dishes were set for the two cats so that they do not get at logger heads while eating. But as if Taara would let that happen. When Maaya started to eat from her designated dish, Taara shoved her head in to it as well, and with a header pushed poor Maaya away. As soon as we witnessed this, they were separated, and Taara was given a new plate with the same food at the other corner of the space. But with no second thoughts, she abandoned it, and again went where Maaya was eating. My daughter then moved Maaya to the new plate, but then so did Taara, with no delay.

For a few days, life seemed like a referee, always on ‘attention’  for a cease fire.  Taara tried all her pranks to  tease or come in Maaya’s way and she provoked her to get angry.  After having got over as a threat, Maaya became a bit high-handed with Taara. But still she was no match to the little evil monster Taara. Barely less that half the size of Maaya, would she wrestle with Maaya as an equal. In fact, most of the provocations came from Taara.

On one occasion, she even managed to scratch Maaya on her snout, leaving a red mark on the pink ridge between Maaya’s beautiful eyes. But Maaya, being a gentlewoman, did not respond with same aggression.

As Maaya felt at ease with Taara, the scene was worth a witness,  when Taara sat at the door mewing and crying for her friend, while Maaya jutted her arm from the space beneath the door, as if trying to reach her crying friend.

All Taara perhaps saw was a mother figure in Maaya. Once when Maaya was asleep, she managed to push her head into Maaya’s belly attempting to suckle. The sight was so painful that we thought of taking her back to her mother, as she perhaps missed her mom’s suckling. My daughter attempted to feed her milk with a syringe, but knowing very well that this wasn’t the real alternative.

Licking by Taara perhaps kindled the maternal instincts in Maaya too and she started to lick back Taara over her face and neck initially, but eventually over all her body.
This has repeated over several times in the past two days. Now, they walk together, sit together to watch TV, feed together and even sleep together, cuddling each other.
In fact, they even go to loo together. As one is in the litter doing the job, the other sits outside, on guard perhaps.

It has been just a week now, and they seemed to have developed the warmest of relations anyone can imagine.

Still, they do wrestle and pounce on each other and we need to watch that it does not turn ugly…but perhaps it wouldn’t. After all they are not nasty human beings, they are lovely cats. 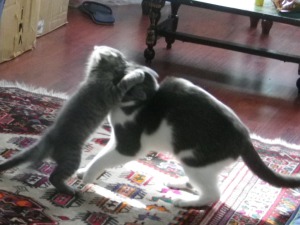 Maaya and Taara watching TV together