Mr Edhi, I know what you mean.

I am really perplexed at the naivety of some of us interpreting Edhi’s statement.

They just choose to pick up the punch line of “killing the politicians” and preferred to ignore the other valid statements he made in which he said, “Political parties are in the opposition or in power, both of which are sides of the same coin. They have been involved in killing thousands of citizens.”
“All tax thieves and zakat thieves live freely in the country. All killers are free, 95 percent of Pakistanis are living in miserable conditions,”

He even made clear, that he has no ambition to come into politics or power, but he would continue to serve the people of Pakistan.

Whatever little I know of Edhi, he is a simple man who knows no mincing of words. He is neither a diplomat with polished demeanour nor is he a politician with twists and turns. Neither does he have any hidden agenda in life. His life is an open book. And above all he has nothing to fear.

It is needless to narrate, but I shall to remind ourselves how noble yet down to earth the man Edhi is.

In a country infested with apathy, he is a man who keeps oceans of empathy for the common man. I stress on the word “common man’. He is the one who has gives shelter to the homeless. He and his wife are the ones who receive illegitimate abandoned new born kids with open hands.

He is a man who does not vie for any foreign funds, or high positions in the pretext of philanthropy. He does not call for press conferences or photo shoots when he launches any project for the poor and the needy. If you ever happen to visit his place on Rashid Minhas road, Karachi, you would find him sitting outside with the drivers, in his simple attire. Anyone unaware of the man would not be able to pick him out from the group sitting there.

The point that I want to make with all this is that if such harsh words come from a man with these above credentials, then there must be some plausible explanation behind it. Anyone with an iota of common sense knows that what he said is undoable.

These words simply reverberate the pulse of the common man, with whom Edhi deals with 24X7. It is his ambulances who reach the site of a blast and keep the unknown bodies for days and months in his morgue. It is he who shelters the orphans from the families whose father dies in the blast or target killings. It is he who shelters the women, young or old, who are left helpless when their husbands, sons, or brothers get killed. He actually witnesses every day what it means when a nameless and faceless poorest of the poor is killed. Most of us just hear it as a statistic on the TV sets. He is a man who is more in touch with the ground realities and common man than even the smallest of politicians.

His words should not be taken in the literal sense. Nor should they be flouted or ignored as insane. These harsh words are the wails of all the dead who fell prey to the violence and of those alive who lead a life worse than death . This is the voice of the pain, frustration and helplessness of the 95% of the people he mentions, who see no hope and respite from the corruption, lawlessness and the injustice.

His words are a red flag for the current situation prevailing in the whole of Pakistan. They speak volumes of the impatience that the masses now have against the corrupt politicians. It signals the lava that is boiling in the volcanoes within each Pakistani.

In fact, this is his simple way to caution the politicians to mend their ways, or else it will be too late. He chooses such cacophony because he knows very well that any words less acrid than this would fall on deaf ears.

I am afraid, Mr Edhi, even these harsh words would fall on deaf ears too. 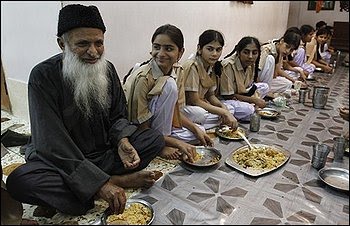 “O God, to those who have hunger, give bread, and to us who have bread, give the hunger for justice.” ~ Prayer from Latin America