Echoes from Ugarit: Peace for Children of Syria

With crisis in Syria affecting me personally, not just for personal friends present there, but also the entire nation, barring none from infants, babies, children, young men, women and the elderly,  and with healthcare destroyed,  I came across this piece of music accidentally:

Echoes of Ugarit composed by a Syrian composer Malek Jandali

It is the composition from the oldest music notation in the world.

Ugarit was an ancient port city in Syria as old as 3400BC.

The Hurrian Hymn (catalogued as Text H6) was discovered in Ugarit, Syria, in the early 1950s, and was preserved for 3400 years on a clay tablet, written in the Cuniform text of the ancient Hurrian language – except from a few earlier Sumarian fragmentary instructional musical texts from c.1950 BCE (Musical Instructions for Lipit-Ishtar, King of Justice) the Hurrian Hymn it is the oldest written song yet known, in History!

The clay tablet from Ugarit:

Moved by the situation back home in Syria, the Syrian American musician Malek Jenadali organized a concert Peace for Syrian Children in US, and is organizing more all over the world.

In a touching program on AlJazeera TV {Here: } he says: “I do not talk politics or faith, I ask for Peace for the Syrian Children.”

Musician turned Peace Activist, on social media he shared this picture of a
message from the children of Syria for the rest of the world: 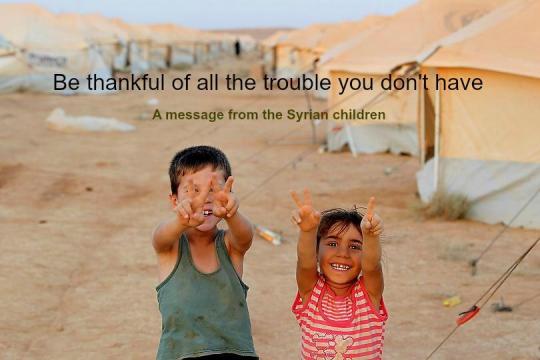 After a long time, this music sounded tranquil and soulful:

P.S. Just when he performed in US, his parents in Homs, Syria were assaulted back home by the regime:

It is heartbreaking to see an amazing country of beautiful people, ancient cities and rich culture being destroyed more and more each day.

May peace and dignity return to the Children of Syria sooner than later.

God resides in your conscience