This is a story from my life and dreams,  in three short episodes.

Time: 8AM on a lazy Sunday.

“I can’t make Nihari in a few minutes. You should have told me yesterday, you want to eat something else.”

“Idea, lets go to Lahore for a Paaye-Nihari naashta at Gawaal Mandi. It’ll take us less than an hour by  car. Keep my passport also in your purse.”

Within 10 minutes we were on the PEACE ROAD  to Lahore, and just an hour later sitting in Gawal Mandi under the open skies in a mild cold breeze, as my husband was ordering two plates of Paaye Naan with doodh-patti chai. 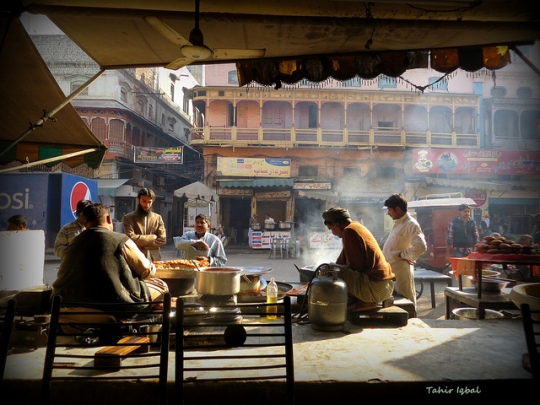 “What are you wearing on the Annual Celebration for our Office.”

“Heyy, you know I saw on TV there is a bumper sale in Rana Sarees in Jodhpur, on bandhnis, leheriyas etc. Even I want to buy one.”

“Idea! Why don’t we plan, take train on Friday,  to Jodhpur and come back on Sunday.”

“Yes, brilliant idea. Rana Sarees is closed on Mondays only.”

Thursday evening, we pack our small trolley bags, and off we are, on Friday morning in the PEACE TRAIN from Karachi to Jodhpur on Khokrapaar-Munabao Railway track.

As the train winds through the golden sands of Thar Desert, we see Thari men and women in their colorful clothes busy with their daily work.  A group of women stop by, turn at us and wave back at our train.

I  look at the woman in a white and red saree,  and scream excitedly, “I will buy a saree of this design.”

In 5 hours we are in Jodhpur. With a shopping spree all Saturday, on Sunday morning, we set off with loaded bags, on the train back home.

Location: Mississauga, ON , Canada.
Time: Early morning on a cold Saturday on a long weekend.

“Winters are depressing, Are we going to spend all three days sitting in the home in front of a fire place?”, my husband.

“No, we can go to America, to have an ice cream in -20 degrees C.”  I remark sarcastically.

The idea hits home.  And in 5 minutes, we were on QEW Highway heading down South and East to Buffalo. In an hour we were at the border, and 8 minutes later, which included clearance from the US Homeland Security of our Pakistani Passports, we were on the PEACE BRIDGE, built over Niagara River, between Fort Erie ( Canada) and Buffalo ( USA).

In two hours after a lunch and an order of cheese cake, we ere driving back home to Canada.

Do the stories sound wierd?

Or perhaps for some, “So what’s there to blog about them? Isn’t that normal. ”

Indeed, for many across the world, such adventures are normal. They travel cross countries   which even speak different languages( as in Europe), without much fuss,  just for a cup of coffee or even go to work across border.

As you may have guessed, only Episode THREE was a real one, while the Episodes ONE & TWO are  still   far fetched dreams.

The fact that Peace Bridge is a reality, it hurts even more to know that Peace Road or Peace Train have to still remain a dream, a far fetched one.

They do occasionally become  a reality, but  for the VVIPs  (only).  For instance, when  one fine weekend the Head of the State on one side  decides to go to the other side for a visit to a shrine, or for a cricket match. But it still remains a dream, and a forbidden one,  for the ordinary.

Even when the ordinary have relations, loved ones or friends on the other side,  all they are entitled to is to dream like the way I dreamt in episodes ONE and TWO.

I know of a true story of a friend, who planned a year in advance to be with her parents, on their Golden Jubilee Wedding Anniversary.  But the visa did not arrive on time.  And when it did arrive, 15 months later, her father was in the hospital, struggling for life.  She fortunately made it,  to see him, and then he passed away two days later in her arms. She felt fortunate to have met her father, and held him in his last minutes of his life.

This wasn’t  her dream, but a true story.

I cant even call myself that lucky. I reached two days after my father was buried. Now I dread for my ageing mother. May she live long, and every time I part with her, I wonder in what circumstances would the next meet be.  Would it be possible at all or not?

With months of excitement about the much publicized NEW VISA REGIME, I had anxiously awaited ( and tweeted) for the arrival  May 25, 2012,  when the document was expected to be signed.  But it was postponed  in the last minute, by a Minister from Pakistan for ‘some’ reason  I didn’t care to explore. For me it was a delay in realization of part of my dreams, for whatever reason-valid or lame.

{However, the divided families did not have much to rejoice from the new agreement, but I still thought this a great step in the right direction.}

Finally in December, when the Ministers met in New Delhi,  the agreement was sealed and signed.
Alas, with  no jinx, we apprehensively took a sigh of relief.

But then, as feared, the tensions at LOC and the beheading incident put the implementation on hold. Again, the ‘not so big’ dream which had come so close to realization had again receded afar.

The dream to cross the Indo Pak Border  is not for Nihari or for  a Saree.  We can get it on the  same side of the border too. They are simply the symbolic magnets of common love and heritage, that the ordinary people on both sides have not been able to ignore, despite years of deliberately created rifts and barriers between them.

Some have outrightly called my Nihari-Saree dream as cynical one, but when few millions ordinary citizens between the US-Canada or within the EU can see this as a reality, why cant the 1.4 billion( a seventh of humanity) across India and Pakistan?

When 3 wars, and countless hostilities have not resolved the differences  why can’t peace and  cooperation be given a real chance?

Like every sovereign nation, India and Pakistan too have the right to ensure, that no miscreants are let to cross the border, but why should the whole population of wellmeaning people be held hostage to the whims and fancies of  few vested interests?

Let the people  interact through easy Visa for the ordinary.

“Interdependence” Day and beyond